Historical content: I wrote this article over 10 years ago on 2006-03-06. You are viewing an archived post from my old WordPress blog. The archive contains over 1,600 articles written over a ten year period. The formatting and contents of the posts may not display perfectly. 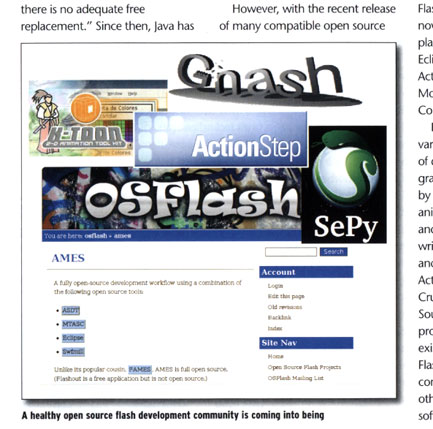 The March 2006 issue of LinuxUser & Developer Magazine has "A Free Software Flash solution emerges" as a lead article in the news section.

The article mentions how, "at one time, the Free Software Foundation wrote of the need for free replacements for Flash (and Java)" and goes on to state that "with the recent release of many compatible open source SWF and ActionScript tools, this is no longer a matter for trepidation in the free software community."

I realized during my talk at FlashForward that we had forgotten to add Apache Ant to the AMES page -- the "A" in "AMES" is overloaded :) Thanks to the miracle of the wiki, I was able to update the page during my talk! What the news article doesn't mention is that OSFlash is much more than just a resource site. We also host open source Flash projects for the Flash community so if you have an open source project and would like a free Subversion repository, mailing list and web space, just submit your request to the OSFlash New Project Hosting Requests page and two monkeys on keyboards (me and my dear friend John Grden) will get to them in the order in which we receive them! The best place to keep up to date with OSFlash is on the OSFlash mailing list.

The article goes on to talk about KToon, SePY and ActionStep as well as the recent emergence of the GNU Gnash player.

"The GNU project's recent release of the Gnash player, with its support for SWF features through version 7, exposes the Linux world not just to Flash files generated with proprietary authoring tools, but also to an increasing body of sites created and maintained with complete free software Flash toolchains that have recently begun to mature."

It is wonderful to see Flash being embraced by the Linux and open source communities and I'm delighted that OSFlash is having such an important role to play in this. At the end of the day, our common goal should be to open up the Flash Platform to as many developers as possible as this is the only thing that will ensure the long-term survival of the platform. In my Open Source Flash Revolution talk at FlashForward, I mentioned how I see a healthy open source Flash development community as a primary indicator of the health of the Flash Platform and it appears that LinuxUser & Developer magazine agrees that "A healthy open source flash development community is coming into being."

If you've ever worked with Flash, you will know what a lovely platform it is to develop on and now, with the impending release of ActionScript 3, Flex 2 and Blaze, along with the various open source tools and technologies that we have at our disposal, we are truly spoiled for choice as Flash developers.

I'm ecstatic to see Flash move beyond its traditional confines and to see the Flash Platform being opened up to new developers from the Linux and open source worlds. Welcome to the Flash Platform and the Flash community, you're going to love it here! :)