Historical content: I wrote this article over 11 years ago on 2005-09-18. You are viewing an archived post from my old WordPress blog. The archive contains over 1,600 articles written over a ten year period. The formatting and contents of the posts may not display perfectly.

Flash 8: This will change the aesthetics of the web... 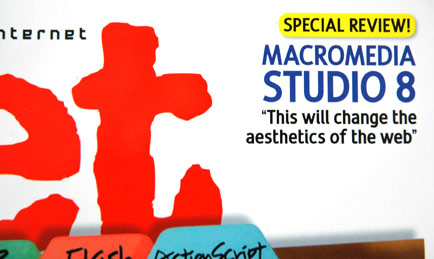 Here are some wise words of advice: If you are going to sit for an interview that might be broadcast around the world and quite possibly go into print as well (a) make sure you are not suffering from sun exposure and sporting a red, sun-burned honker from the day before and, (b) if you are, that you absolutely *insist* that the video crew use makeup on you even if they tell you that they'll "fix it in post". The interview I'm referring to is the one of yours truly talking about (the then-unreleased) Flash 8. It was shot towards the end of the beta days and has apparently been touring the world as part of Macromedia's launch roadshow for Studio 8.

Just recently I saw that they also quoted me on the cover of .Net magazine ("This will change the aesthetics of the web") and, lo and behold, a freeze-frame of the video, Rudolph-nose and all, adorns the article inside. 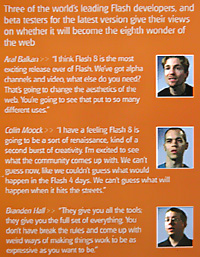 Don't get me wrong, I'm not really complaining. It's amazing in this day and age that I've made the cover of a magazine, even if only in quote, without having to wear a skimpy dress or bikini :)

The highlight of all this was probably seeing the article in this month's Practical Web Projects magazine on Flash Design, wherein I had the honor of being placed in the same box as Colin and Branden -- two of the greatest Flash developers I know.

"Three of the world's leading Flash developers, and beta testers for the latest version give their views on whether it will become the eighth wonder of the web."