Historical content: I wrote this article over 6 years ago on 2010-11-24. You are viewing an archived post from my old WordPress blog. The archive contains over 1,600 articles written over a ten year period. The formatting and contents of the posts may not display perfectly.

If you just updated to Xcode 3.2.5 and iOS SDK 4.2, you might find that your existing projects do not compile. This probably doesn't surprise you as it's been the way for every SDK update as far back as the beginning of time (at least in the Jobsian calendar). Thankfully, with Xcode 3.2.5, you can set your base SDK once and for all and it should work for all future releases.

But first things, first, here's the error I received while trying to compile one of the early projects from my iOS SDK workshop: "error: there is no SDK with the name or path 'iphoneos4.1'"

Also, when I looked under the Overview drop-down in Xcode, I noticed that the settings there were entirely wrong: 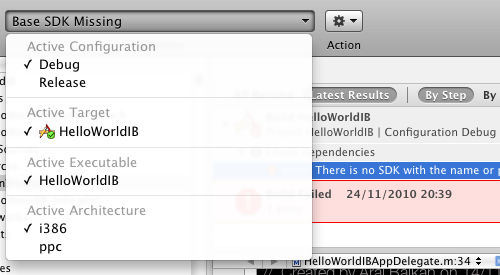 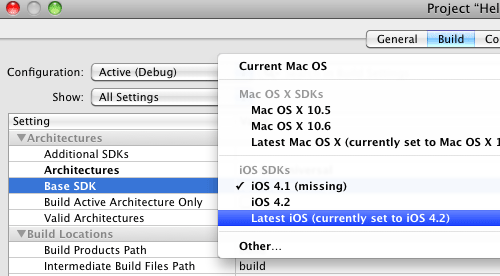 Closing the Project Settings, however, did not update the Overview drop-down and I could only build for the device, not the simulator. 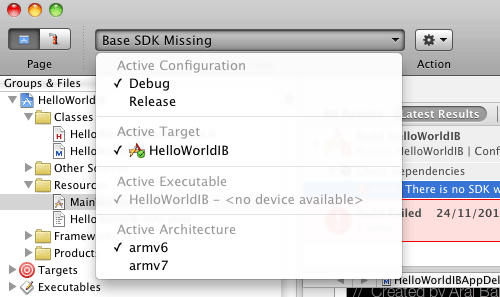 To fix this, I had to restart Xcode.

Update: You don't have to restart Xcode: closing the project and reopening it also fixes it. Thanks to Amar Kulo for the heads up.

After restarting Xcode, the Overview drop-down displayed the correct information and I was up and running again. 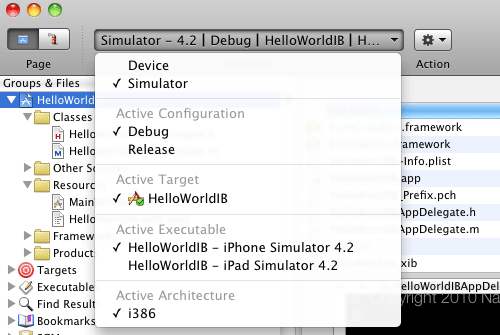 I hope this helps you if you encounter the same issue after upgrading to Xcode 3.2.5 and iOS SDK 4.2.

Update: The core frameworks will also appear to be missing initially. This, too, will be fixed after you re-open the project so don't go through the effort of re-importing them.

Update: Also, if in 4.1, you added the iOS SDK 4.1 workaround for the CGPDFContext.h:60:23: error: expected function body after function declarator error, you need to remove this or you will get a warning: '__IPHONE_OS_VERSION_MIN_REQUIRED' macro redefined.

Update: I also had thousands of warnings on a project that uses the Google Toolbox for Mac HTTP Fetcher and had the -Xclang -fobjc-nonfragile-abi2 flag set in the project (this allows you to skip @synthesize statements and implicitly creates the, umm, implicit accessors). Removing the compiler flag removed the 20,000 or so warnings also. For the record, I consider this a WIN.