Historical content: I wrote this article over 6 years ago on 2010-11-02. You are viewing an archived post from my old WordPress blog. The archive contains over 1,600 articles written over a ten year period. The formatting and contents of the posts may not display perfectly. 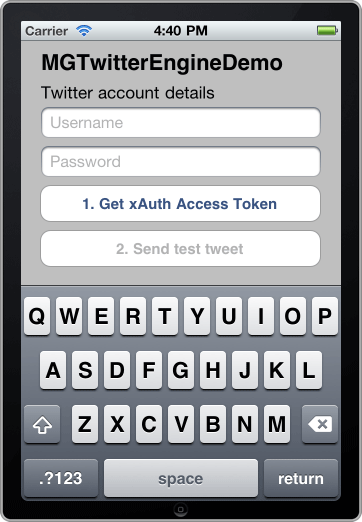 One of my goals in releasing XAuthTwitterEngine was to have a simple demo that developer's could use as a reference – something that "just works". I still think that's necessary for MGTwitterEngine so I created a new one based on the demo project in XAuthTwitterEngine.

Check out the MGTwitterEngine demo project on Github.

Some notes on the demo:

As the first step in porting Feathers back to MGTwitterEngine, I'm planning on evolving XAuthTwitterEngine into a façade that simply proxies calls to MGTwitterEngine. When that's ready, I'll release it as a drop-in replacement to get those of you using XAuthTwitterEngine to seamlessly and transparently switch to using the latest and greatest MGTwitterEngine (or, if you don't want to wait, Scratch that, I just had a look at it and it's definitely more trouble than it's worth – it's easier to just use the demo I liked to above as a guide to port your apps yourselves. The façade should just be an intermediary step anyway.)

Hope you find the demo project useful in getting up and running with MGTwitterEngine.