Historical content: I wrote this article over 11 years ago on 2005-04-14. You are viewing an archived post from my old WordPress blog. The archive contains over 1,600 articles written over a ten year period. The formatting and contents of the posts may not display perfectly.

Everything you always wanted to know about 8ball...

Mike Downey and Mike Chambers demoed the upcoming 8ball IDE at their Flash In The Can keynote and I was busy snapping away piccies. Here then, is 8ball in all its public glory. I think I managed to get pictures of all the new features that were made public at FITC. Here's a look at what's on the horizon in the next version of Flash, starting with a wide shot of the whole IDE. 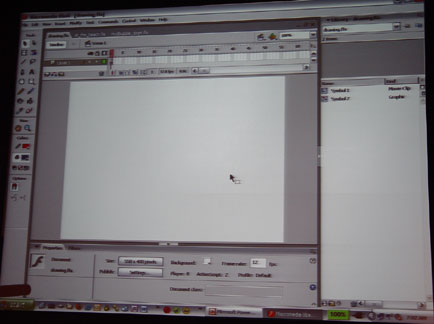 The 8ball IDE in all its glory. At first look, it doesn't look like a lot has changed from Flash MX 2004 but, as Mike showed us, there are some *amazing* new features and improvements hiding all over the place. See if you can spot some differences... 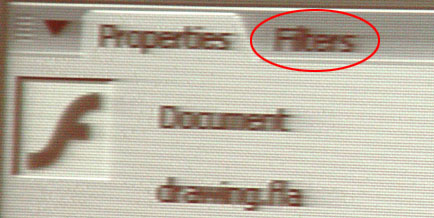 The new Filters tab in the Property Inspector.

More filter settings. These are for the Drop Shadow filter that Mike showed us. 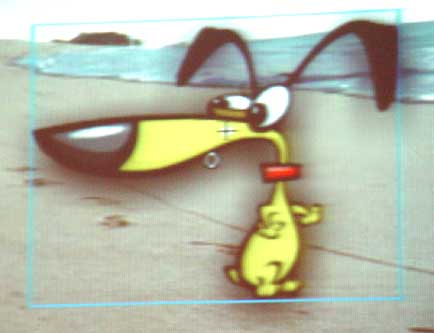 A movieclip of a cartoon dog with a drop-shadow filter applied in Flash. 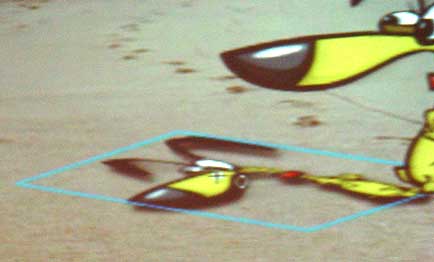 Mike made a copy of this, rotated it and placed it so that it would resemble a realistic shadow... Now if only we could have just the shadow remain... 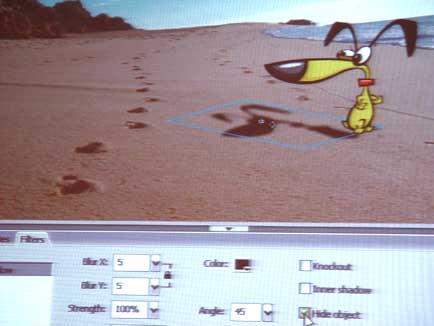 "Hide Object" to the rescue! Hiding the movie clip leaves just the shadow. I guess it can't get better than this... 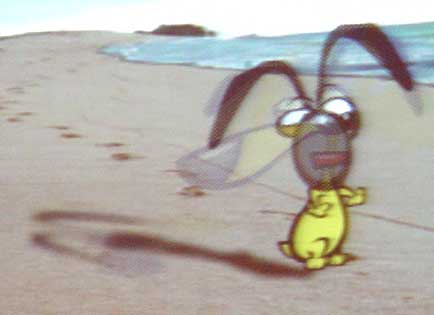 ... but it does: The shadow is just a copy of the original, animated, movieclip and, when the movie is run, animates along with the dog. This is an amazing effect (and so darn easy to achieve!) 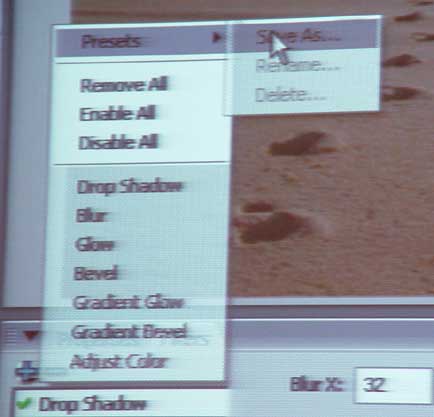 The other filters: Drop Shadow, Blur, Glow, Bevel, Gradient Glow, Gradient Bevel and Adjust Color... looks like there will be lots for us to play with! 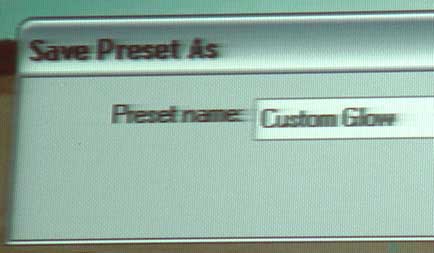 Apparently, you can even save your own custom filter presets. 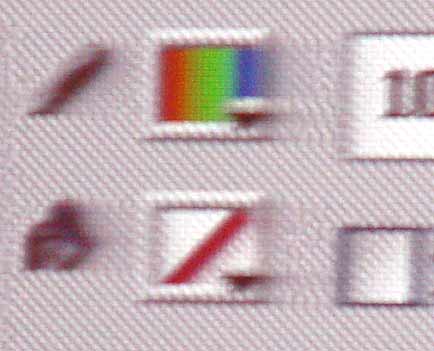 Nice stroke... would you like a gradient with that? :) 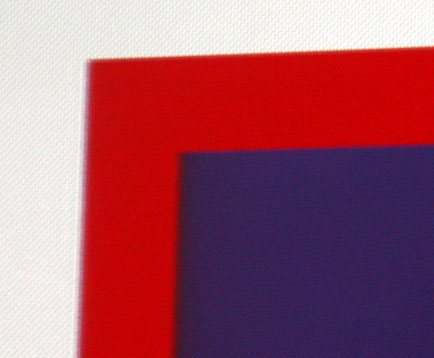 A square join in Flash: Who would have thought we'd see the day! The single most asked for feature?

Some of the other new items on the Property Inspector. 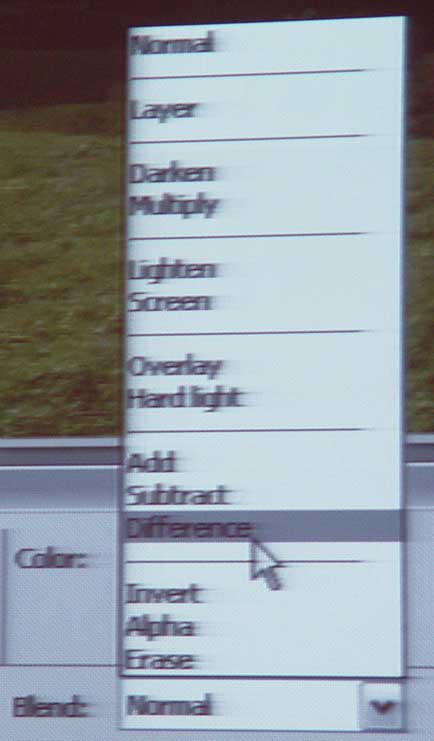 Along with Filters, Mike showed us Blend Modes. These work like the blend modes in Photoshop and Fireworks but in real-time at runtime. The possibilities are quite limitless. 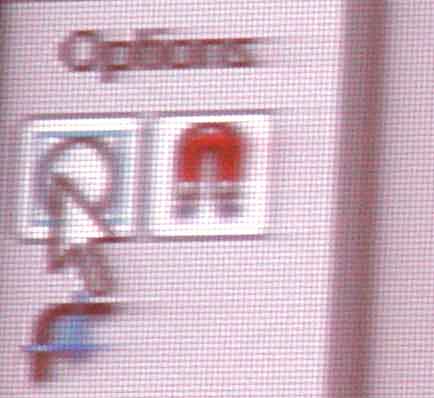 A new drawing mode to bring Flash in-line with other vector illustration tools. As you know, Flash has always had its own way of drawing, where shapes take bites out of each other when they overlap. From what we saw, 8ball will also allow a drawing mode that stops shapes from canabalizing each other. 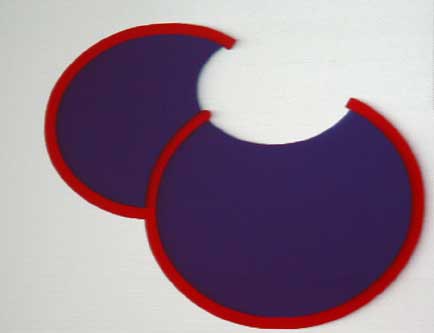 The current drawing mode: Great for animation, not the best for illustration. 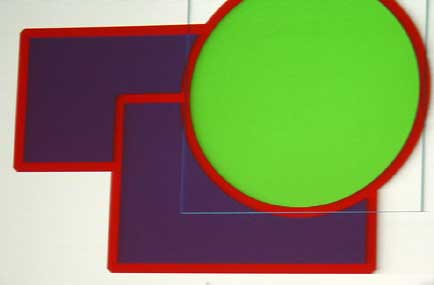 The new option: Each shape is self-contained and doesn't affect the ones around it. 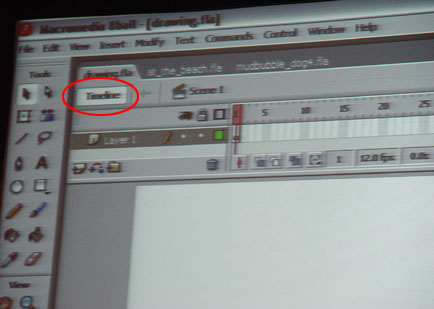 The timeline looks a little different.

Look at that: Multiple libraries in a single Library panel. 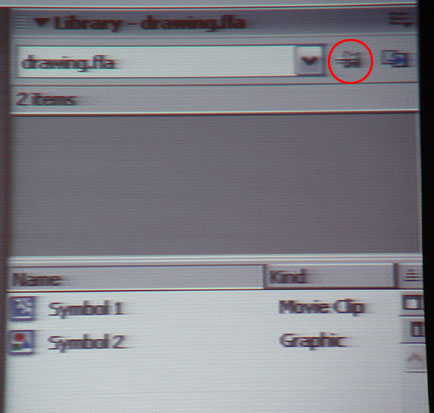 The ability to pin libaries is going to come in very handy... 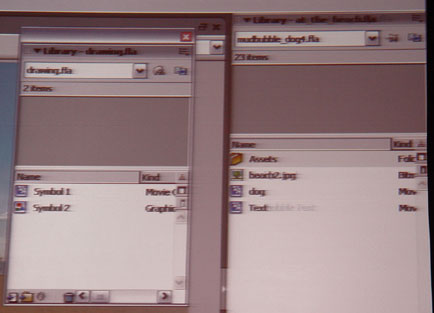 ... Especially when working with multiple FLAs and multiple libraries. Mike showed us how you can pin one of the library panels and easily copy assets from one open FLA to another. Also, the library now remembers its position (yes!)

I have to say, from what I've seen, I am more excited about 8ball than I have been about any other release of Flash (and I've been through a few!) 8ball looks like it's going to kick some major you-know-what.