Historical content: I wrote this article over 6 years ago on 2010-06-15. You are viewing an archived post from my old WordPress blog. The archive contains over 1,600 articles written over a ten year period. The formatting and contents of the posts may not display perfectly. 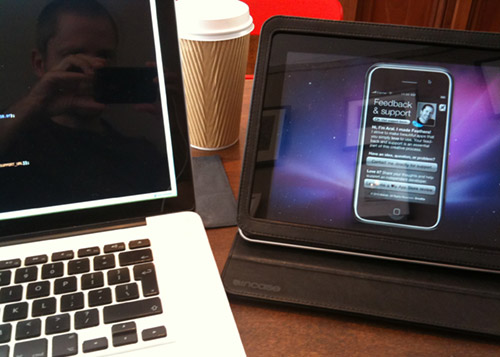 The iPhone Simulator is a handy development tool for debugging your iPhone and iPad apps as you develop them. It is not, however, in any way an alternative to testing on an actual device. One of the reasons that the iPhone Simulator doesn't give you the actual device experience is because your Mac's screen is not a touch screen. Until now, if you wanted that, you would have to either test on your actual device or use an app like iSimulate to send touches (and other device data) to your app. While iSimulate and its ilk are still a good alternative, I've found a setup that serves me well for 90% of my debug-time testing: an iPad, coupled with the Air Display app.

Air Display is an iPad app that lets you use your iPad as a second monitor. It actually works really well (I also bought iDisplay, earlier, and did not enjoy the experience at all). To test your app, simply drag the iPhone Simulator to your iPad (make sure mirroring is turned off so that your screen stretches to the iPad). The coolest thing is that because your iPad has a touch screen, you can test your app in the iPhone Simulator with touches instead of mouse clicks.

Of course, this doesn't mean that you shouldn't test as often as you can on an actual device (as the iPad doesn't recreate the ergonomics of the iPhone perfectly). Also, if you need other sensor data (like the accelerometer, etc.) then also consider getting an app like iSimulate to compliment your toolbox.

Hope you find this useful!

If you have time-saving development tricks of your own, please feel free to share them in the comments.