Historical content: I wrote this article over 6 years ago on 2010-06-14. You are viewing an archived post from my old WordPress blog. The archive contains over 1,600 articles written over a ten year period. The formatting and contents of the posts may not display perfectly. 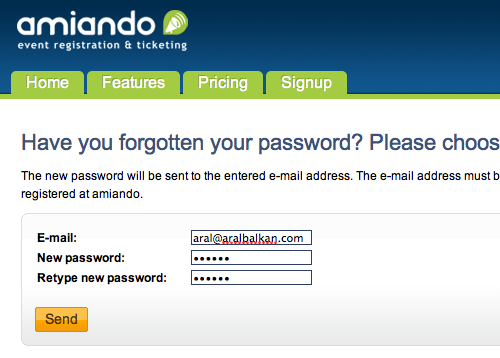 You've no doubt seen various implementations of this UI pattern: all of these rely on using your email address to verify that you are indeed the user requesting the password reminder (or reset). But – as with everything else in UX – the devil's in the details (it's about The Little Things), as they say.

I keep coming up against two implementations that seem to have become de-facto standards:

Amiando's form, however, implements a subtle evolution on the second method that makes the process even easier: on the initial form, they ask you for the new password. It's a simple little thing but it does mean that they've grouped the bit that requires cognitive load in one place. Now, all I have to do is click the link in the email to confirm my request and I'm up and running with my new password. It also means that the confirmation link has a single function and that its meaning is not overloaded to mean "confirm this request and then go on the site to pick a new password".

The Amiando implementation does fall flat on two important details however:

Firstly, it doesn't remember your email address. Since you've already entered your email address while trying to sign in, the forgotten password form should remember that email address to save you effort. I've seen this error made by nearly every forgotten password form I've encountered, so other developers should take note. It's not a difficult refinement to implement and it will result in an instant usability boost for your app (especially at a time when the user, not being able to sign in, is already frustrated).

Secondly, when you click on the link to confirm your new username and password, the site doesn't sign in you in automatically. Since it has confirmed your identity at this point and knows that you were trying to sign in, it should take the initiative and save you some effort.

(One of the worst implementations of this pattern that I saw actually changed your password without confirmation and then sent you an email with the new password. What a nightmare! Using that system, anyone could force a password change on your account on a daily basis, thereby forcing you to sign in and change your password back and probably driving you insane in the process.)