Historical content: I wrote this article over 6 years ago on 2010-04-01. You are viewing an archived post from my old WordPress blog. The archive contains over 1,600 articles written over a ten year period. The formatting and contents of the posts may not display perfectly. 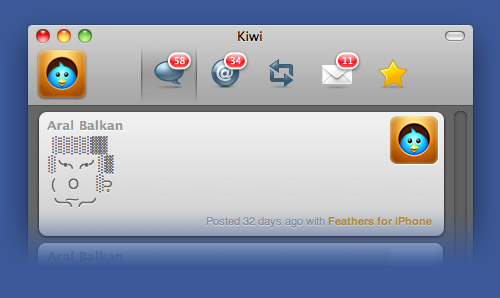 Show off your plumage with Kiwi

Kiwi is a beautiful Twitter app for Mac. What sets it apart from other apps is that you can create your own themes for it to customize it to your heart's content. This is great news for Feathers users because it means that you can have your Feathers tweets display exactly as you intended them to by changing the display font to the one used in Feathers (Arial Unicode MS).

To make this easier for you, I've created a Feathers theme for Kiwi (based on the Gray Kiwi theme by Elixirgraphics) that you can download and use.

To install the Feathers theme for Kiwi:

What if I'm not using Kiwi?

On some Twitter clients, might find that some of your more elaborate Feathers tweets (e.g., multi-line Unicode art) doesn't display exactly as intended. Why is this?

In a nutshell, it's either because your Twitter client (or device – e.g., BlackBerry) doesn't support Unicode properly, or because it doesn't display newlines in tweets properly. Finally, small differences in the way your tweets look may be because your Twitter client uses a different font to the one in Feathers. On some Twitter clients, you can fix some of these issues using the settings. (You can set Tweetdeck, for example, to display extended Unicode characters by making it use the International Font/Twitterkey setting under Colors/Fonts.)

You can also make your Feathers tweets more compatible by choosing Helvetica as your font in Feathers using the iPhone Settings app → Feathers → Font. (This is the font used by Tweetie and Tweetdeck).

If you want your Feathers tweets to display beautifully in all Twitter clients, why not write to your Twitter client author and ask them to give you the option of displaying tweets using the Arial Unicode MS font? Also, if they don't render newlines in tweets, ask them to add that feature also. (One notable culprit is the Twitter website itself, which does not render newlines correctly on the main site but does on the mobile site – this is a bug that I hope Twitter will address shortly.)

At the end of the day, better Unicode support and the ability to customize the font that your tweets are displayed in will benefit not just Feathers but the Twitterverse in general.

In the meanwhile, if you're on a Mac, check out Kiwi – a beautiful Twitter client that lets you view your tweets as you want to view them and a great desktop companion for Feathers.