Historical content: I wrote this article over 6 years ago on 2010-02-20. You are viewing an archived post from my old WordPress blog. The archive contains over 1,600 articles written over a ten year period. The formatting and contents of the posts may not display perfectly. 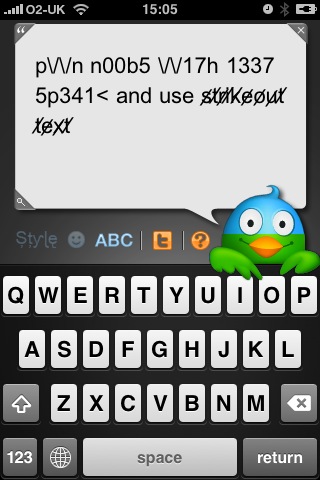 It's only been a week since the release of Feathers and I just submitted the first update to Apple.

The new update has two new styles and new magic quotes substitutions for you to play with. It also brings with it the option to turn of auto-correction (including auto-capitalization and those annoying periods that get autoinserted when you enter two spaces following a character.) Auto-correction is on by default but you may want to turn it off if you do a lot of Unicode art.

Finally, Nicolas will be happy to know, that the Feathers icon no longer displays the shine so you can see it as he always intended it to be seen! ☺

Hopefully, the update will be approved by Apple and go live on the App Store within a few days.